Streaming and watching streams in Discord

I moved my working streams from Twitch to the Party Corgi Network discord. Here's what I know if you're looking to make a similar change.

Enter a voice channel by clicking on it. This will put you in the voice channel with anyone else that happens to be there, including your microphone. If you are here to watch and listen without talking, you can mute (also known as "deafen") your mic using the mic icon. A red strike means your mic will not produce any output to the rest of the participants.

Currently up to 25 people can stream at the same time. I haven't ever seen this many people streaming at the same time and also being useful, but it's possible. To start your own stream, you must click the "Screen" button after connecting to a voice channel. 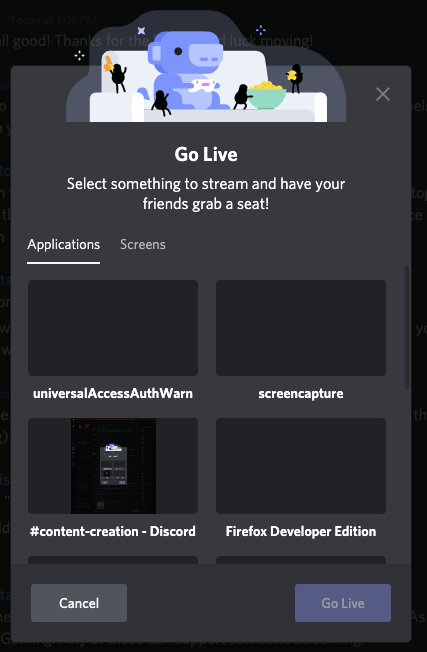 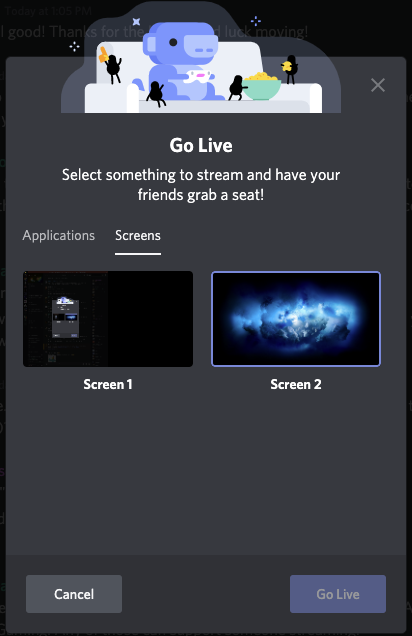 <Aside>If you are on Mac OS, you may need to allow the following screen recording access to stream.</Aside>

After choosing something to stream, you will be live.

The Party Corgi Network Discord server has a #voice-chat-text channel in addition to a number of voice channels. This channel is for any link or code sharing, as well as the primary venue for people who do not have live mics to participate.

You can not stream from a capture card or OBS into Discord. This is unfortunate and makes re-using your OBS scenes from your Twitch harder. It is possible to do this, however the technique requires that the stream takes up the same resolution on your monitor that you want to display to people watching. Thus, this is a technique most adequately used by someone with two monitors, so that one can be the Discord screen-share, voice connection, and that the other can be captured without needing to run OBS or Discord.