How MDX Conf 2020 came together in a month

MDX Conf 2020 was the first conference for the MDX project. It came together in about a month's worth of effort (excluding time in the middle where we waited to execute on it) and was a community conference, without corporate attachments or sponsorships. This served to declare the goals of the project as an open spec across frameworks more firmly. The videos are available now.

John brings up the idea of MDXConf. 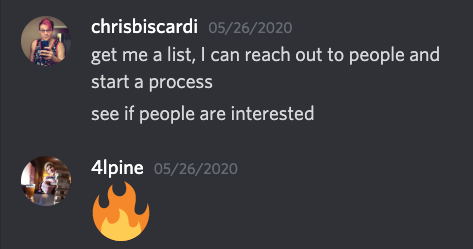 We then also decided that

Finally I (Chris) started a gist with the relevant speaker info in tables. Whether we reached out to them, whether they accepted, what talks we were reaching out for them to take on (talks were suggestions, not mandated. More like "hey we see you've been doing X work, we'd love to have you to talk about that or whatever else you find interesting").

John also notes that he doesn't want to speak

We had started sending individual invites to some of the speakers closer to the project to see if they'd be interested before sending out the full speaker invite list. However the killing of George Floyd (wikipedia) and related events ramped up the stress levels for many people and we decided not to send any more invites and effectively put the entire planning process on hold.

In between now and the conference, we realized there was enough interest from potential speakers to do an MDX Conf 2.

We also recorded a number of podcast episodes (15m) as promotional material for the conf and the speakers. The content focused on highlighting the speakers rather than MDX.

The podcast sessions went live on the Party Corgi Podcast.

Chris finishes up the OBS asset and automation setup for the stream, confirms and processes all speaker video to normalize audio volume and similar, and overall prepares to MC MDX Conf 2020.

The conference happens. It goes off without really any problems. The Discord server and twitch chat need barely any moderation, if any. The stream itself goes for about 3 hours totaling 7 talks.

Later that day we shut down the Discord server and funnel people over into the Party Corgi Network if they want to keep talking about MDX. We don't have the resources to maintain and moderate an MDX server but PCN is already established so can take on any people who wish to continue participating.

The videos were uploaded to egghead which the egghead team amazingly turned around super quickly. Their support was majorly appreciated in this effort. Especially Zac Jones.

Overall this was a great success and I'm looking forward to MDX Conf 2.